The rocket, originally scheduled for lift off at 8:24pm on the night of July 4th, faced many delays due to the weather conditions. The CEO of ELA, Michael Jones, prioritised safety and decided to postpone the mission. Eventually, NASA’s rocket successfully launched on Wednesday, 6th July 2022, marking the second completed lift off from ELA’s Arnhem Space Centre.

The NASA Black Brant IX suborbital sounding rocket had a mission to help astronomers understand how starlight influences a planet’s atmosphere, possibly making or breaking its ability to support life as we know it. The Suborbital Imaging Spectrograph for Transition region Irradiance from Nearby Exoplanet host stars (SISTINE) mission was for the University of Colorado, Boulder. Preliminary analysis shows that good data was received by the science instrument during the flight.

SISTINE was the second of three NASA space science missions scheduled from Arnhem Space Centre. The X-ray Quantum Calorimeter (XQC) rocket experiment from the University of Wisconsin made history after a successful launch on 26th June 2022. The rocket was the first NASA rocket launched from a commercial site outside of the United States, and also the first client of ELA’s Arnhem Space Centre. The last of the three series, carrying the Dual-channel Extreme Ultraviolet Continuum Experiment (DEUCE) is scheduled for 8:27 pm ACST, 12th July 2022. Read more about the scheduled rockets here.

The three rockets’ scientific studies can only be conducted from the southern hemisphere. Want to work in the stars? Here are six future space jobs you could hold Standing on Ground Zero of the Arnhem Space Centre 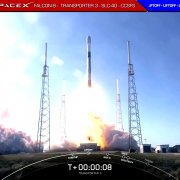 Spotlight on Aliena
Scroll to top